It Shall Be Well With Them That Fear God 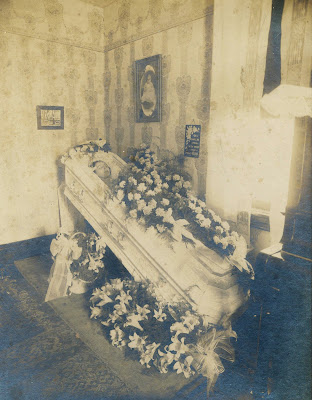 This memorial image of a deceased woman laid out in the parlor of her home was taken by Sterling of Beaver Falls, PA, most likely in the 1910-1920 era. The original image measures about 8 by 9 inches and comes on a 12 by 14 inch photograph mount. The photographer’s name and city are embossed in the lower right corner.

This is a fine example of the tradition of “laying out” the body at home, which many people continued to do long after funeral homes came into existence. On the wall hangs a cardboard plaque with a quote from Ecclesiastes: “It Shall Be Well With Them That Fear God”. A framed portrait of a baby can also be seen. The room is nicely appointed with Victorian wallpaper, rugs, lacy curtains, and the family’s piano. Opening the window to allow the sunlight in was probably the photographer’s idea and it definitely adds to the artistry of the image.

The casket is dramatically propped up to raise the head - this was probably done to increase the visibility of her face for the photograph. The ornately shaped casket, which is covered in fabric, features a two-piece removable lid. The upper part of the lid can be seen standing against the wall. Easter lilies figure prominently in the floral tributes, and this death probably occurred in the spring, when lilies would have been readily available.
© 2009, copyright Stephen Mills
Posted by Stephen Mills at 6:58 AM