I love these elaborate images of what I refer to as “home memorial shrines”. This reflects a different way of thinking about funeral flowers than the one we have today. It appears from the number of these images I’ve run across that many times some of the funeral arrangements were not left at the cemetery, but kept at home to assist in the mourning process. These wonderful displays were probably maintained in the deceased’s home for a few days or weeks after the burial. This first image, by H. T. Biel of Terre Haute, Indiana could have been done in the studio or at home – it’s hard to tell. The deceased’s name, Anna, appears on the arrangement directly below her photograph. Representations of the cross, the anchor, and the lyre are included, as well as the gates of heaven, crowned with a dove. 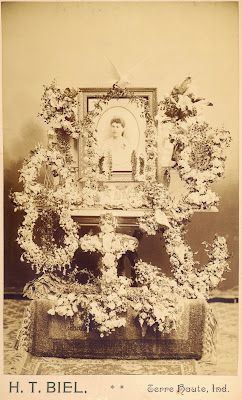 The image below was clearly taken in the parlor of a home and it pays tribute to a man with many friends and connections. The floral representation of the gates of heaven and the dove is one of the best I’ve ever seen. Several of these arrangements are from organizations, such as the S.U.N.A. (Switchmen’s Union of North America) and the K.O.T.M.M. No. 56 (Knights of the Modern Maccabees). I did a little research on that one and learned that the KOTMM, a benevolent and fraternal organization, was organized into local chapters known as Tents, and that Tent No. 56 was located in Muskegon, Michigan. It’s probably safe to assume this image is from Muskegon or nearby.

Upon close inspection with a loupe, the dove is holding a rose in its mouth. I must say the dove looks remarkably real and I have to wonder if it’s stuffed. That would not be unheard of for this era. 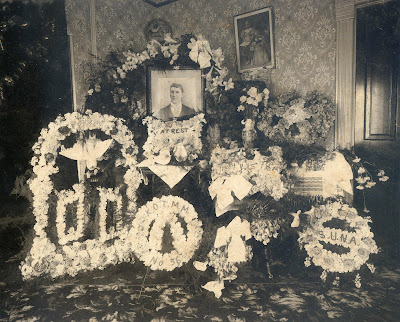