For Clara Finger - When I’m Gone 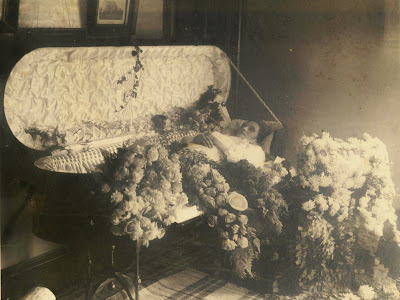 Here’s another great example of a dear lady laid out in the parlor of her home, most likely about 1910-1920. She’s not identified, but there’s an inscription on the back that says “For Clara Finger – When I’m Gone – H.E.H.” The original owner apparently took care to ensure the photograph would go to a person who would appreciate it, and of course I’m curious to know if Clara Finger ever received it and, if so, why it ended up for sale in 2002.

The peacefully posed subject is resting in a beautiful drop-front casket, which sits atop an ornate wooden stand. The floral decorations spill out from the casket interior onto the floor. One of the large arrangements has letters on it, which I can’t fully make out, but it could read “Lette”. No doubt this lady was greatly loved and mourned.

The photographer’s embossed imprint in the lower right corner says “G. W. Delling, Madelia, Minn.” Madelia is in Watonwan County, MN. Mr. Delling shows up there in the 1900 census, with his occupation listed as “Artist”. In the 1910 and 1920 censuses, he’s still living in Madelia, with occupation shown as “Photographer”. He was 67 years old in the 1920 census and isn’t listed in the Minnesota 1930 census, so I assume he died in the 1920s or moved elsewhere. This photograph, which is in excellent condition, measures 11 by 13 inches including the mounting board, and the image comes in at 8 ½ by 9 inches.

Add comment
Load more...
Newer Post Older Post Home
Subscribe to: Post Comments (Atom)
And am I born to die?
To lay this body down?
And must my trembling spirit fly
Into a world unknown?
A land of deepest shade,
Unpierced by human thought,
The dreary regions of the dead,
Where all things are forgot.
Soon as from earth I go,
What will become of me?
Eternal happiness or woe
Must then my portion be;
Waked by the trumpet's sound,
I from my grave shall rise,
And see the Judge with glory crowned,
And see the flaming skies.