Here's a couple of photos taken at the Pioneer Cemetery, Ranger, Eastland County, Texas of the monuments of my great-great-great grandparents, Cary and Emily Watson. I love the iconography on these old monuments - note that Emily's features the veil at the top, symbolizing the finality of death and her departure to a new life behind the closed curtain. The inscription on her stone reads "Emily E., wife of Cary Watson Born Nov. 9, 1825 Died Dec. 26, 1908 Blessed are the dead which die in the Lord". Cary's monument reads "Cary Watson Born Oct. 13, 1820 Died Dec. 13, 1904". It's a Woodmen of the World stone in the shape of a rough-hewn log, with a scroll, floral decoration, and the Masonic emblem. Emily Elizabeth (Watson) Watson came to what is now Bowie County, Texas in the fall of 1833 at the age of 8. The area at that time was under Mexican rule. She was the daughter of Coleman Watson and his wife Lucy (Coleman) Watson, who were first cousins. Emily was a descendant of several early and prominent Virginia families, including the Colemans, Leakes, and Coffeys. Cary Watson's family arrived in Texas somewhat later, in 1837, and settled in Bowie County at a time that it was part of Red River County, Republic of Texas. He was the son of James and Rhoda Watson. His ancestry has proven to be one of my biggest research challenges over the years.
© 2009, copyright Stephen Mills
Posted by Stephen Mills at 6:22 PM 2 comments:

O! If I Could Only Have Kept Her 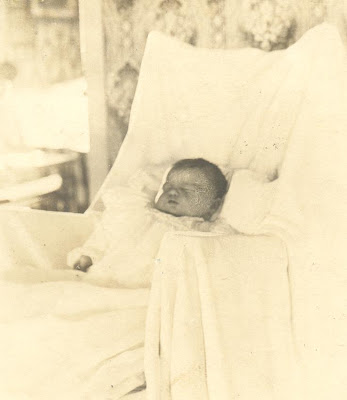 This unusual real photo postcard, purchased at an antique mall in Lubbock, Texas in 1993, poignantly conveys a mother’s pain at the loss of her child. Only rarely do I run across a postmortem photograph with contemporary historical information on the reverse that documents the depth of feeling and details of the photographic sitting that we find here. The reverse is stamped “Curtis C. Benedict, Mitchell, Iowa” and the following is written there: “Selma Marie Donaghy Born [and] Died Aug 16, 1911. O! if I could only have kept her./Ma and Pa./It just makes me sick to look at this dear little thing. Don’t you think she has an awful distressed look on her face. It must be because they worked so hard to get it.” This card was apparently sent to the grandparents, so they could see the little baby that had been lost. The mother commented on how difficult it was for the photographer to get the deceased baby posed. Even though she knew her baby was gone, she attributes the look on Selma’s face to the discomfort she endured during the photographic process. God bless little Selma with the distressed look on her face - and God bless her mother, who could not keep her.
© 2009, copyright Stephen Mills
Posted by Stephen Mills at 4:28 PM 3 comments: 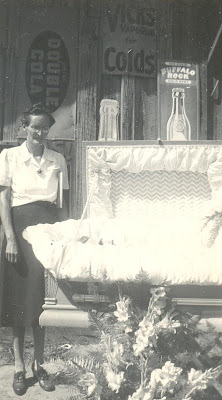 When I became interested in genealogy at the age of 11, one of the first things I noticed was how often genealogists, of necessity, come into contact with death and burial mementos and artifacts. To answer my many questions about our family history, both of my grandmothers referred to their keepsake boxes, which were filled with newspaper clippings of death notices, funeral cards, and a few funeral photographs. Among these keepsakes of death, I found a wealth of history.

As I continued on my genealogy journey, I also discovered a significant interest in antiques and I found myself unable to pass up an antique store or flea market. In these establishments, I frequently buy funeral-related items that have found their way onto the market. Having amassed a large collection of this memorabilia over the years, I thought I’d share some of my gems for others who may have a common interest.

I bought this snapshot at the Salvation Army Store in my hometown of Pampa, Texas in 1988. It cost twenty-five cents and the clerk made a face that clearly indicated how strange she thought I was for buying it. Oh well, she’s not the first person in my hometown that I’ve rubbed the wrong way!

This is Mrs. Gruben of Spur, Texas about 1940 standing next to her husband’s casket, which was placed in front of the general store they owned - an interesting intersection of amateur photography, commercialism, and death in small town Texas.
© 2009, copyright Stephen Mills
Posted by Stephen Mills at 12:47 PM 1 comment:

Labels: Photography
Newer Posts Home
Subscribe to: Posts (Atom)
And am I born to die?
To lay this body down?
And must my trembling spirit fly
Into a world unknown?
A land of deepest shade,
Unpierced by human thought,
The dreary regions of the dead,
Where all things are forgot.
Soon as from earth I go,
What will become of me?
Eternal happiness or woe
Must then my portion be;
Waked by the trumpet's sound,
I from my grave shall rise,
And see the Judge with glory crowned,
And see the flaming skies.