Here’s two great old photographs that depict over-the-top floral displays. Both images appear to be from the 1920s. The first one looks to be taken in a private home, but possibly a funeral home, and the photographer’s embossed imprint shows that it was done by Brack of San Marcos, Texas. Written on the back is “Elnora” and underneath that “L. G. Coovert”. Mr. Lewellyn G. Coovert, born in Indiana c1871, is shown in the 1910 census of LaSalle County, Texas and in the 1920 census for San Marcos, Hays County, Texas, with his wife and a number of children, including a daughter, Elnora born c1914. In 1930, his wife is a widow and Elnora is still at home, so I assume he died in the 1920s and this photo is his casket and floral offerings. In 1910, he is a farmer, but in 1920, he is shown as a “marble worker”. At any rate, he apparently had a host of friends and relatives who mourned his passing. 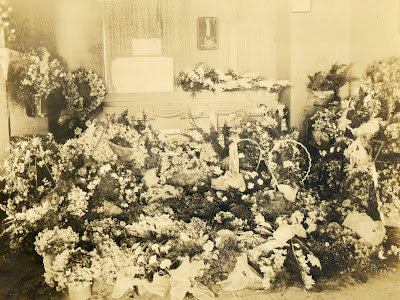 This image shows massive floral offerings arranged after an interment. There are no clues as to who or where, but this came from an Austin, Texas estate and so it could easily be from this area. There’s a large arrangement in the shape of an anchor and another that is a lyre. Although this quantity of flowers was frequently the norm in years past, many people now find this to be a distasteful waste of money, and prefer that donations be made to charities instead. I guess they're right, but these flowers are certainly impressive and I'm sure the families felt comforted to know that so many people cared for their loved one. 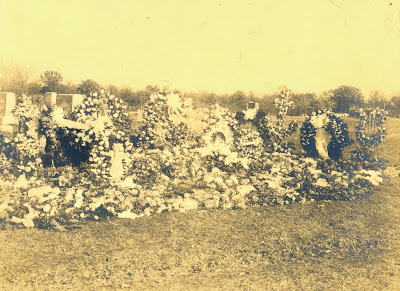 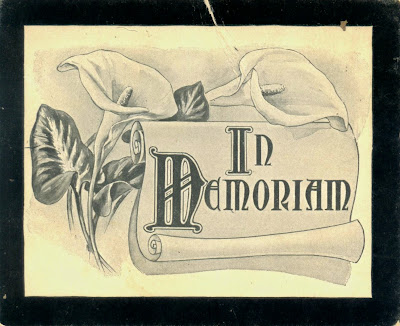 This great old funeral notice announces the death and funeral of Mrs. Frank P. Marshall, who died March 11, 1904 at the age of 27. Her funeral was held March 13, 1904 at the Christian Church in Enid, Oklahoma. The notice predates Oklahoma statehood by several years.

The small folder measures about 3 by 2 ½ inches and is printed on nice thick stock. I bought it at an antique store in Vernon, Texas in 1978. It was the first purchase for what has become a large funeral-related memorabilia collection. 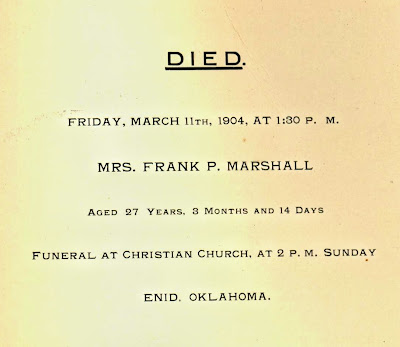 Labels: Funeral notice, Memorabilia
Newer Posts Older Posts Home
Subscribe to: Posts (Atom)
And am I born to die?
To lay this body down?
And must my trembling spirit fly
Into a world unknown?
A land of deepest shade,
Unpierced by human thought,
The dreary regions of the dead,
Where all things are forgot.
Soon as from earth I go,
What will become of me?
Eternal happiness or woe
Must then my portion be;
Waked by the trumpet's sound,
I from my grave shall rise,
And see the Judge with glory crowned,
And see the flaming skies.