First, let me share a pet peeve. I frequently see obituaries that refer to the “internment” of the deceased. That is not the correct term. According to Merriam-Webster, “interment” means the act or ceremony of putting a dead body in its final resting place, and a synonym for interment is burial. “To inter” means to bury or entomb. “Internment” means the act of confining or the state of being confined, especially during time of war, and synonyms for internment are captivity, confinement, and imprisonment. (A correct usage of “internment” would be “The internment of Americans of Japanese descent during World War II is one of the more shameful chapters in United States history.”) Yes, the terms are somewhat similar in meaning, but they are definitely not interchangeable.

Anyway, today I thought I’d share some real photo postcards of interments. A real photo postcard is exactly what you’d think it is – a postcard bearing an actual photograph. These were common from about 1910 to 1950 – the photo could be professional or amateur, and anyone could have negatives printed with the inexpensive postcard backs. They were suitable for mailing, and many were mailed, although the images shown below are postally unused. Postcard collectors refer to them as RPPCs or RPs. For more information about the world of postcard collecting, you can visit the Capital of Texas Postcard Club, of which I’m a member. For detailed information on RPPCs, this link to Playle’s is outstanding.

None of these images are identified as to cemetery location or name of deceased. These cards all date to the 1904-1920 era, based on the design of the stamp boxes on the backs (see the Playle's link for more information on dating RPPCs using stamp box design). The first image shows a wonderful old graveyard with some seriously large floral tributes, including one from the International Order of Odd Fellows (IOOF), of which the deceased would have been a member. The other arrangement looks to be symbols of Masonry; I don't know how common it was to be in both societies. 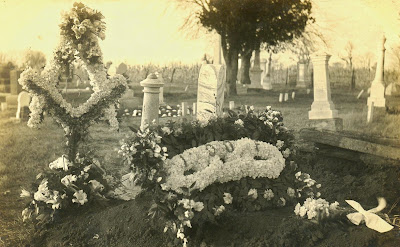 This image shows a cemetery with graves uniformly outlined with bricks. This is an interesting old tradition, which is frequently not seen today, since it’s much easier to maintain a cemetery that does not have grave outlines. You also see old graves that are outlined with rocks, shells, iron or wood fencing, or that are mounded to form the outline. The modern version of outlining is the use of concrete grave covers and/or curbing. 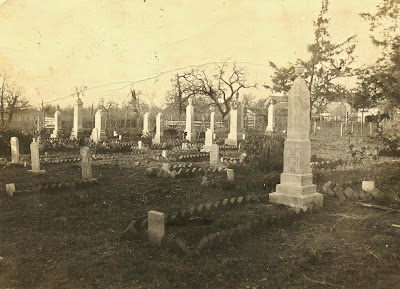 The last image shows a close-up of a burial with floral offerings and grave markers in the background. 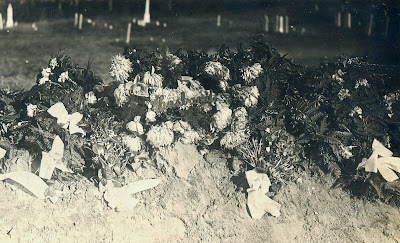