As a longtime collector of American funeralia, I’ve accumulated a large quantity of death-related memorabilia. This series of posts will examine the different categories, characteristics, and purposes of paper funeral collectibles.

Memorial cards, properly called cabinet memorial cards, are the size of cabinet photographs, measuring 6 ½ by 4 ¼ inches. They were printed on thick card stock, as were cabinet photographs. A number of companies produced the cards, most notably the Memorial Card Company of Philadelphia. I also have cards from a number of other companies, including E. C. Stark Memorial Cards of Philadelphia; H. F. Wendell & Co. of Leipsic, Ohio; National Memorial Co. of Northfield, Vermont; Art Memorial Co. of Baltimore, Maryland; and George Mitchell Fine Memorial Cards of Greenfield, Indiana. 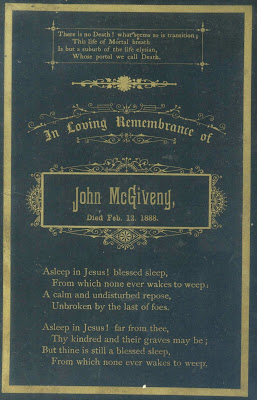 The earliest example in my collection is dated 1888 (shown above), the latest example is from 1927, and most of the cards are from the 1895-1915 era, which seems to be the heyday of these cards. The card manufacturer is frequently not identified, but some makers imprinted their advertising on the back or on the bottom of the card. A memorial card for Cora Esther Schucker, who died March 6, 1891, has a piece of advertising glued to the back that provides valuable insight:

“This Memorial Card is sent to you for your inspection. It has been for a number of years in Europe and lately in many parts of the United States, a beautiful custom upon the death of a dear friend or relative to prepare a suitably inscribed Memorial Card of the deceased, which kept in the family album or neatly framed becomes not only a token of respect to the memory of the departed one, but is a continual reminder of one who in life was near and dear to you. Thinking that you would appreciate one of our Cabinet Memorial Cards, we have taken the liberty of submitting this sample to you for inspection. If it meets with your approval, you can retain it by remitting to us the price, 25 cents. Additional copies can be procured at the following prices: 6 for 50 cents, 9 for 75 cents, or 12 for $1.00. Should there be any mistake in the printing, or should the card be injured in the mail, return it to us with 25 cents and the corrections you desire and we will rectify it.

"Your particular attention is called to the clearness and brightness of our gold work, in comparison to the numerous imitations, which you no doubt will receive. Being the originators of this business in the United States and having special machinery for the manufacture of these goods, we can guarantee our work to be first-class in every particular.

"If you do not wish to retain it, cross off your name and address on the large envelope wherein we sent it to you, and return it to us. For price list, designs, verses, and other information see the accompanying descriptive circular. Very respectfully, MEMORIAL CARD CO. P. O. Box 619, 120 and 122 N. Seventh Street, Philadelphia.”

The memorial card companies probably subscribed to various newspapers to learn of local deaths, and they may also have employed persons in different areas of the country to clip death notices. The company would then make a memorial card, using the information in the obituary, and send it to the survivors along with a solicitation for orders. In those days, of course, there were no addresses required for mail, unless a person lived in one of the largest cities, so it was easy to reach people this way. I would say this was a very effective marketing strategy. Below are images of Cora Schucker's memorial card, front and back. 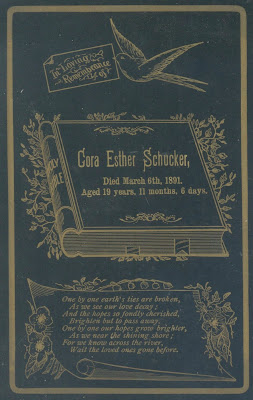 Memorial cards, then, would have been ordered and received well after the funeral services concluded. Their purpose was to serve as a keepsake to memorialize the deceased; they were sized and marketed to be kept in the family photo album (along with the family’s cabinet photographs) and that is where you still find many of them today.

Memorial cards were also available with a photograph of the deceased glued onto the card, although this type of card was undoubtedly more expensive and is seen much less frequently than the others. The identifying information on the photograph card below is worn off, but it was for J. W. Pitt, who died December 29, 1899. 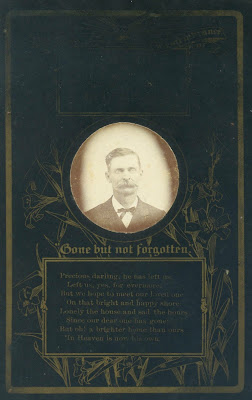 In the earlier years of their popularity, memorial cards tend to be black with gold lettering and designs, although other background colors were available. Beginning about 1900, other colors were used more frequently, primarily white and gray, and it may be that eventually black was no longer the preferred color. None of the memorial cards in my collection after World War I are black; all of those examples are white. My examples of gray cards date from the 1900-1910 era. Most cards have smooth edges, but I do have several deckle-edged cards, one of which is shown below. 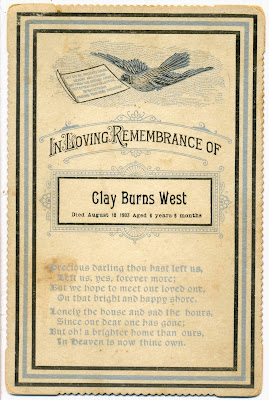 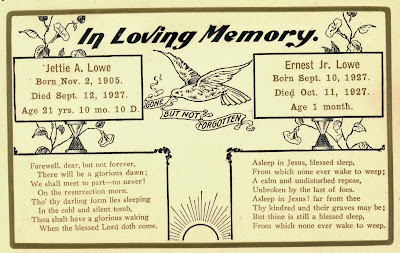 Cards are occasionally seen memorializing multiple deaths, as in the Lowe card above and this card. 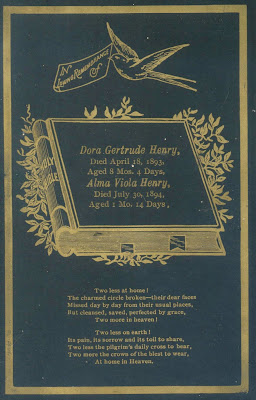 Here's a nice card from the Wendell Company of Leipsic, Ohio. 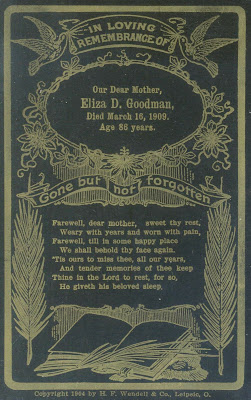 This card was manufactured by the Stark Company of Philadelphia. 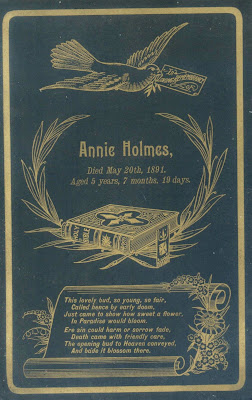 This card was manufactured by the Art Memorial Company of Baltimore. 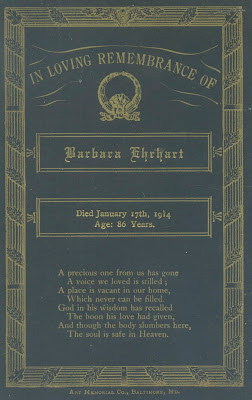 Lastly, the card below is a white card with a double poem, done by the Wendell Company. 
Soon as from earth I go,
What will become of me?
Eternal happiness or woe
Must then my portion be;
Waked by the trumpet's sound,
I from my grave shall rise,
And see the Judge with glory crowned,
And see the flaming skies.